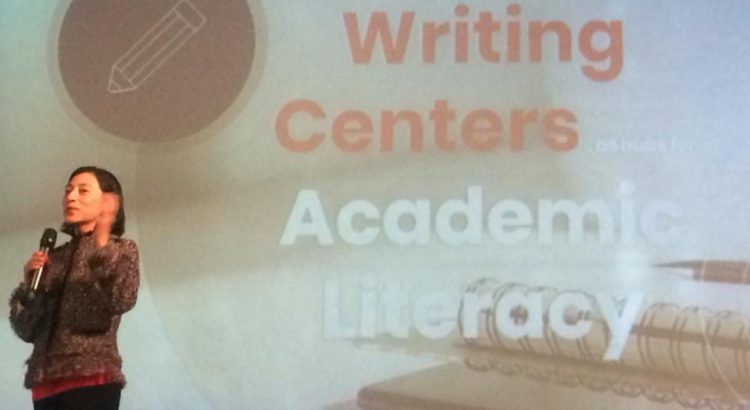 Christiansen’s participation was funded by the U.S. Department of State English Language Programs and by invitation from the conference organizer Dr. Elena Bazanova, director of the Academic Writing Center at National University of Science and Technology (NUST MISiS).

Her keynote talk, “Writing Centers as Hubs for Academic Literacy,” discussed five different ways that scholars can promote writing beyond the writing composition classroom. Christiansen also offered three workshops and individual consultations with faculty and researchers of RSSU, NUST MISiS, and participants from different cities throughout Russia, such as Kazan, Samara, and St. Petersburg.

In addition, as an English Language Specialist for the U.S. Department of State, she provided a workshop at the American Center in the U.S. Embassy in Moscow and had the opportunity to meet the U.S. Ambassador to Russia, Jon Huntsman, Jr., during a reception.

Christiansen’s workshops included topics on academic writing at all stages. At the beginning stages, for example, she offered a way to write introductions and conclusions. The lecture can be found on the English Language Office Facebook page.  For advanced levels, she offered two workshops: one on how to write literature reviews, and another on how to paraphrase sources effectively. For the editing stages, she discussed ways to use citations to boost credibility and avoid plagiarism.

Christiansen’s participation at conferences and workshops in Russia supports the internationalization of UTSA and will forge ties between Russian and U.S. scholars. It also opens doors to collaboration and study opportunities among students at UTSA and Russian institutions. One such project is a collaboration on blended learning that will begin next semester between a UTSA master’s level Teaching English as a Second Language class and a Russian undergraduate English class.

For access, some of the handouts and presentation slides for these workshops, visit Dr. Christiansen’s personal website.

The University of Texas at San Antonio